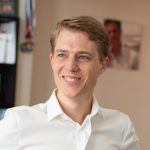 In 2015 I graduated from Den Hartogh Logistics, a logistics service provider in the (liquid) chemical and gas industry. After graduating, I decided to stay with Den Hartogh and worked in the operation for a while. After almost 2 years I had the opportunity to develop a worldwide S&OP process with a project team to better balance the tank container network. After the implementation of this project and having kept this process running for a number of months, I became responsible for the tank container planning in Europe.

Why did you choose the industry you work in now?

The company was the deciding factor for me, not the industry. Den Hartogh is a very open, ambitious and hardworking family business. I discovered this during my graduation project and that made me decide to stay here. Of course you have to be interested in the industry and its challenges, but it was not on priority #1.

Is there a step in your career that has been decisive and if so which one?

I don’t think there’s one step that has shaped my career, but I don’t really believe in it either. I think it’s about discovering what gives you energy. Which activities, which working environment, which colleagues, etc. And that you continue to (and dare to) seek this energy. Then you end up with a position, left or right, that suits you well.

A technical business expert often knows how to look closely at the bigger picture. Suppose you can exchange with Mark Rutte for a week and the Netherlands is your BV, which 2 things would you find important and tackle?

Wow, I had to think about that for a moment! What interests me enormously is the individualization and hardening of positions in a world that is becoming increasingly globalized and increasingly virtual.
You also see this in organizations (reinforced during the corona crisis)! olleagues no longer meet informally, their conversations are only businesslike. That lowers empathy and miscommunication lurks. In order to continue to understand each other and to be able to work well together, that conversation at the coffee machine is indispensable.
I think that also applies to society. We must continue to meet in order to develop understanding for each other. So I would probably argue from the Turret for more community spirit!

What advice would you give current students?

Don’t always keep all options open or think about what your next career step should be. Make your choices consciously and then go completely ahead. Then the opportunities come naturally.

You can change a question, which one would you change and why?

Old question: Is there a step in your career that has been decisive and if so which one?

New question: To what extent does your expectation about your career during your student days differ from today? 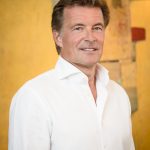 I graduated from Atlas Venture in Amsterdam at the end of 1987. These were the early years of Venture Capital the Netherlands. I then continued to work there, first in Amsterdam and in 1989/90 in Boston. After about 9 years at Atlas, I started early 1996 at the newly merged Endemol, where after a few months it was decided to apply for a public listing and the IPO actually became a fact in November that year. I was responsible for M&A, Legal and later on for Interactive as well. Together with my colleagues across 23 countries about 70/80 companies have been acquired, numerous joint-ventures were created and multiple multi-year contracts negotiated. After having been a Member of the Executive Board for numerous years (as one of the youngest board members in the Netherlands) and having sold ourselves to the Spanish Telefónica, I – again after about 9 years – started investing privately in companies (most appealing one in the Netherlands was Hyves) and subsequently I founded our own Venture Capital firm Endeit Capital together with Joop van den Ende. I recently increased my stake from 50% to 75%.

What makes you happy in your work?

Getting things done, in my case especially if our companies become among the top 3 in Europe or top 5 in the world. Apart from that, I am active at a number of foundations both to stimulate entrepreneurship and in the medical field (Jong Ondernemen Foundation, LOEY Foundation, ItsME Foundation), very nice to do.

What was the most important moment in your career and why?

Several moments such as the start at Atlas but also the steps afterwards. I think that in the end you should not stay with a company for too long (certainly not in the first phase of your career). Although I had a great time at both Atlas and Endemol, I think in retrospect that I was with both companies about 2 years too long. The learning curve flattens out at some point in time and it becomes a little more autopilot.

What does your work/life balance look like at the moment, and are you happy with that?

Because I have my own business, it doesn’t really feel like work. It’s just something I enjoy doing. That does mean that a lot of time goes into it. The same goes for my wife Bernadette who also did business administration at the TUE and also has her own company. In addition, we have two fantastic sons and a super daughter.

How do you distinguish yourself as a business manager from managers with a different background? In which aspect is the greatest added value as a business administrator?

I think that abstract thinking in a problem-solving way is the most important thing we ‘got’ from university. I still notice every day that there are people who have difficulty with fairly simple problems; if we then sit down for a while, it is often resolved fairly quickly. If I look at myself, in addition having a feeling for new trends at an early stage as well as strategic thinking with a strong emphasis on a clear focus. Apart from that, connecting people adds value.

You can change a question, which one would you change and why?

Old question: ‘How could the Business Administration programme at TUE be further improved?’

New question:
‘Looking back on your career, would you make the same choices with today’s knowledge?’

Why:
Reflecting is, in my opinion, one of the most important ways to learn. I like to reflect and by sharing your reflections with other BDK-ers, you might be able to give them new refreshing insights.